For those of you who celebrate Halloween, I hope that your bellies are full of candy.

For those of you who don’t, go buy yourself a big bag of Snickers. You deserve it 🙂

So, All Hallows’ Eve has come and gone, and here in Northeastern Ohio, that can only mean one thing: Great Lakes Brewery Christmas Ale.

If you live in the region, you understand the gravity of this sentence.

Here in Ohio, Christmas season starts early. On October 24th, to be exact. This is when Cleveland’s Great Lakes Brewing Co. taps its infamous Christmas Ale for the first time of the season, and you’d better believe it is THE event of the year. We’re talking media coverage, lines in the streets, even Santa himself makes the trek from the North Pole to get a taste of the spicy yet sweet-as-honey beverage.

About a week later, madness ensues as Christmas Ale starts showing up in local grocery stores. Normal, law-abiding citizens turn to crazed, Christmas Ale seeking fiends as they stalk Great Lakes’ delivery trucks, learning when and where stops are made each week. Contributing to the frenzy is the fact that this Ohio treasure is only available for about 8 weeks, which means folks are currently in the process of stockpiling for the entire winter.

When our local supermarket received its first shipment, a Tweet was delivered to my phone…and my heart was instantly full of emotion: Excitement, as the dream of Christmas Ale in my fridge became closer to reality. Joy, as I thought of that very first sip. Then…crushing defeat as I realized that I was an entire work day away from being able to secure my first 6-pack.

I cannot explain the heartache I endured, sitting in my cubicle-home, wondering if any Ale would be left by the time I made it to the store.

I don’t even really like beer all that much. But this stuff makes my mouth water.

Besides, it’s an Ohio tradition.

This year, in honor of the blog, I thought I’d start my own little tradition: Christmas Ale Ice Cream. 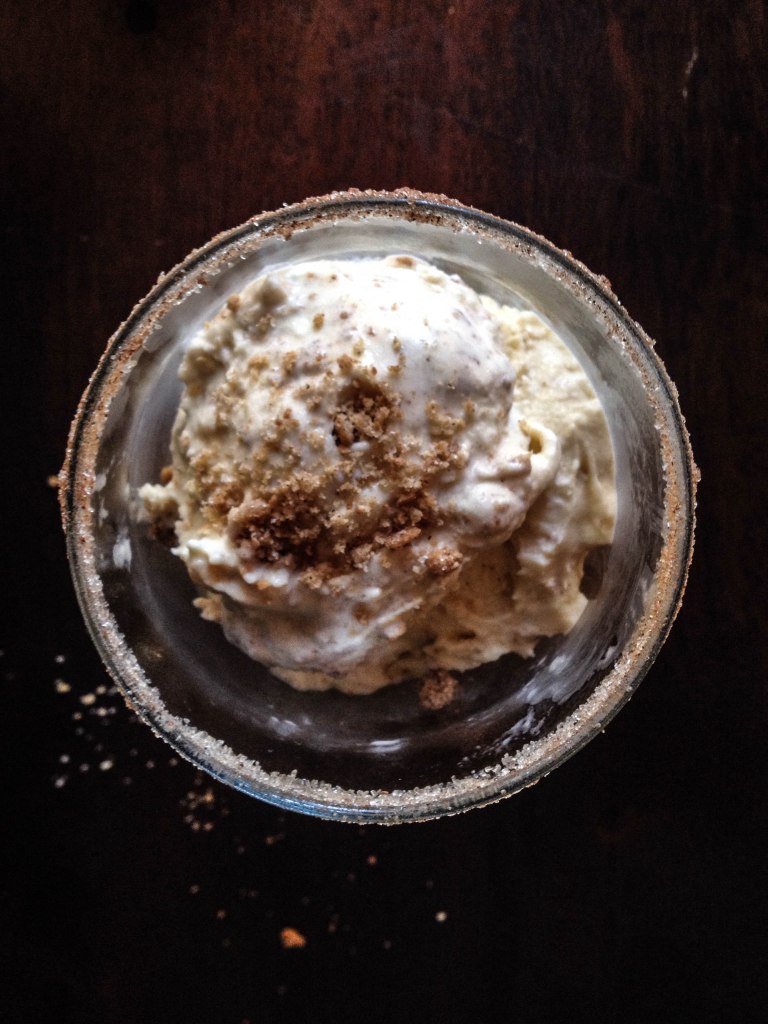 I was a little nervous about adding so much alcohol to ice cream, so I turned to the undisputed experts: America’s Test Kitchen. If you too, are weary, read this article. Now.

Are you done yet? Good.

So now you know – the key to a successful beer ice cream is to first simmer a portion of the beer to get rid of the excess water. The rest is easy peasy!

The result? Rich and creamy, soft and smooth, boozy but not too boozy. This stuff is pretty darn perfect. I’ve also added a ginger and cinnamon graham cracker swirl – reminiscent of the cinnamon sugar mixture that many bars in town use to rim the glasses in which Christmas Ale is served.

You can use any Christmas Ale, just as long as it’s between 8% and 12% ABV (Great Lakes is actually 7.5%, but was absolutely wonderful, so you could probably stretch those boundaries a little bit).

How do you know its the holiday season in your part of town?

For the ice cream:

For the ginger graham swirl:

1 package of graham crackers (about 6 crackers), crushed into fine crumbs