From the very first moment that I set out on this blogging adventure of mine, I made a conscious decision that If the Spoon Fits would be a happy place. A frivolous escape from reality where I’d attempt to maintain a general atmosphere of positivity and keep the focus on things that I love.

And by things I love, clearly I mean pancakes, chocolate, salt, puppies, cookies, donuts, bacon, and booze, among other things.

So, you know.  Basically everything except fruit.

I know, I know – I’m starting to sound like a broken record here with my “Just because I’m an adult doesn’t mean I have to like fruit” nonsense. Rah rah rah.

But I’m trying to change you guys, I really am! And I’ve been taking steps – albeit, baby steps – to start opening my mind (and palate) to fruit-centric desserts.

I’ve dabbled in apples, dedicated an entire post to mangoes, and I’m starting to develop a rather strong affection for strawberries in particular this summer (I blame you, Brooklyn Homemaker!).

However, despite such commendable progress, there is still one fruit that I’ve been intentionally avoiding. 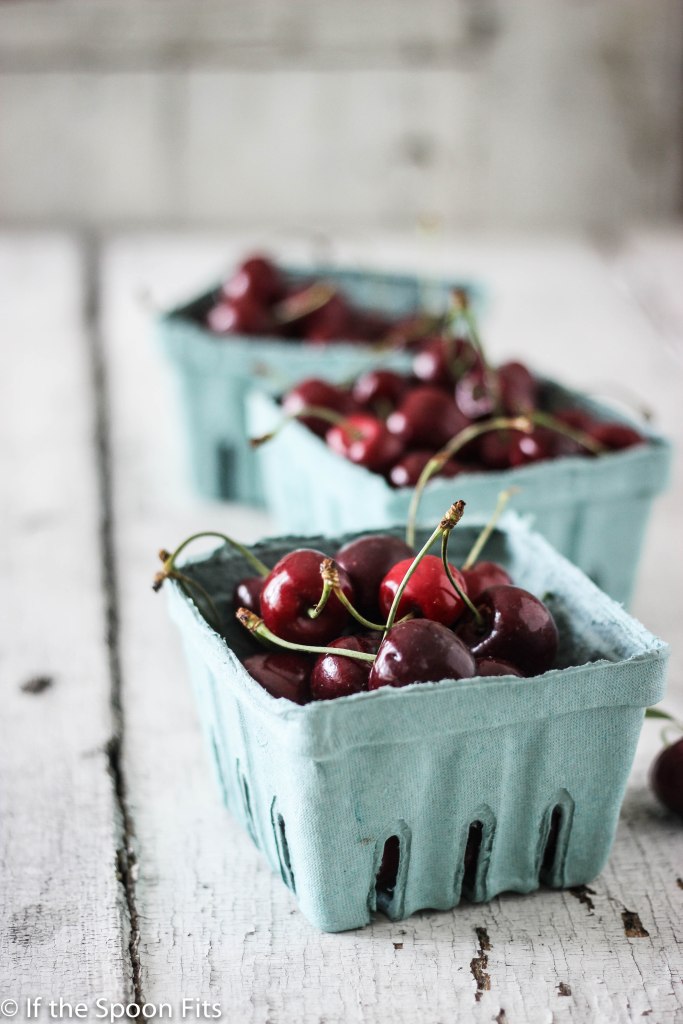 Of all the fruits for which I hold disdain, my relationship with cherries is by far the most tumultuous, plagued with an array of emotions ranging from indifference to pure rage. And I can trace it all back to a single underwhelming experience as a 5 year old..

I’m the first to admit that I didn’t have the most refined palate growing up (but in my defense, what typical American kid does?).

I was one of those lovely, agreeable children who always just wanted chicken nuggets and ice cream, and everything outside the bounds of these two items was subject to extreme scrutiny. Like many kids my age, my first experiences with “cherries” revolved more around cherry flavoring than the fruit in its natural state, and this pleased me immensely. In the world of a 5 year old, where the culinary choices can be abundant and overwhelming, I always appreciated when my options were limited to either Red or Blue.

Popsicles, slushies, suckers, juice boxes, you name it – I almost always went with the Red option. I was a classic gal, and that Blue Razzleberry nonsense didn’t really fit into my lifestyle. Plus, Red always made me look like I was wearing lipstick, and when you’re 5, it’s important to look hot.

After years and years of eating Red Things, I eventually destroyed the ability of my taste buds to recognize natural cherry flavor. The culmination of these faux cherry experiences arrived on the traumatic occassion in which I sampled actual cherries for the very first time; a poignant memory that I hold onto to this day. 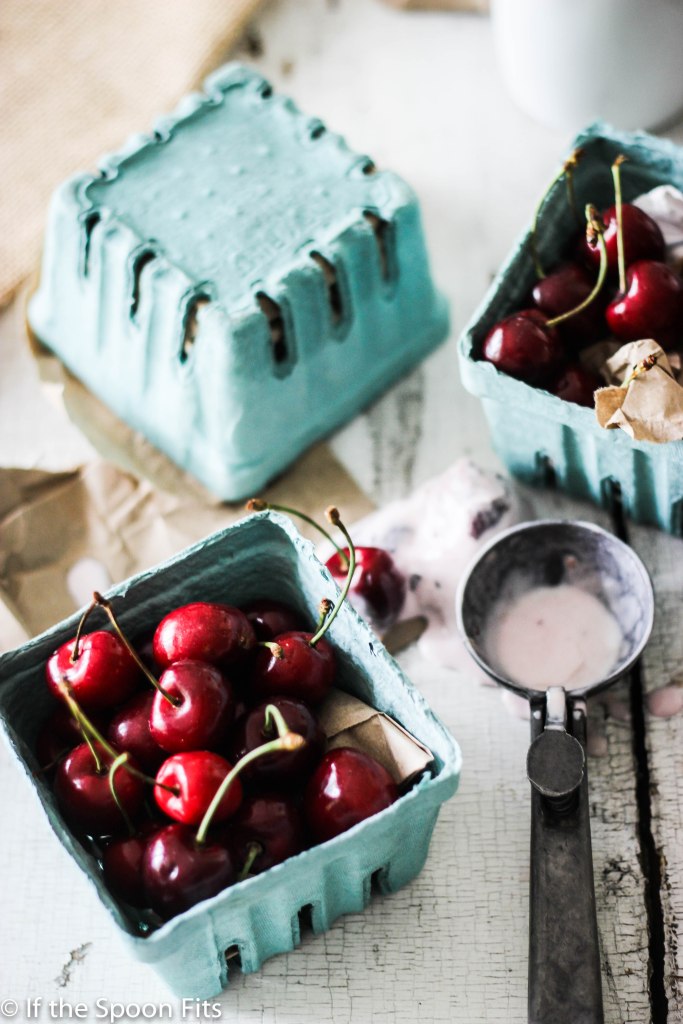 I remember it like it was yesterday: I was painting rocks, going about my business, probably wearing a Disney t-shirt of some sort (probably Little Mermaid. She rocked, before I figured out It’s Not Okay to Change Yourself for a Man. But I still love her).

My mom had brought home some fresh cherries from the store, and called me over to the kitchen to hand me one of the strange pieces of fruit. I was intrigued: it was bright and shiny with an interesting green stem poking out of the top, and best of all, it just looked so RED. This is gunna be good, I thought.

But then, I took a bite, and the reality of the situation shocked my 5 year old conscious.

I’d been lied to.

“Screw that!” I said, throwing the half-bitten cherry to the ground.

(Okay, so I might have embellished that part just a bit; I’m sure the scene wasn’t that dramatic. At 5, I didn’t yet have that much animocity).

However, I distinctly remember thinking, this isn’t cherry. It doesn’t taste…Red…enough.

You know something is wrong with your world (and your palate) if you prefer the distinctly chemically taste of Fla-Vor-Ice to actual fruit.

From that day forward, I knew I didn’t want anything to do with cherries.

Needless to say, I’ve never really given them a fair shot.

But then the other day I was at the grocery store and abruptly stopped in front of some fresh local cherries, merchandised so adorably in their little robin’s egg blue containers. I bought them impulsively, but when I got home, I was stumped. After a lifetime of dissing cherries, all of a sudden I had to turn them into something amazing, and I had no idea what to do. 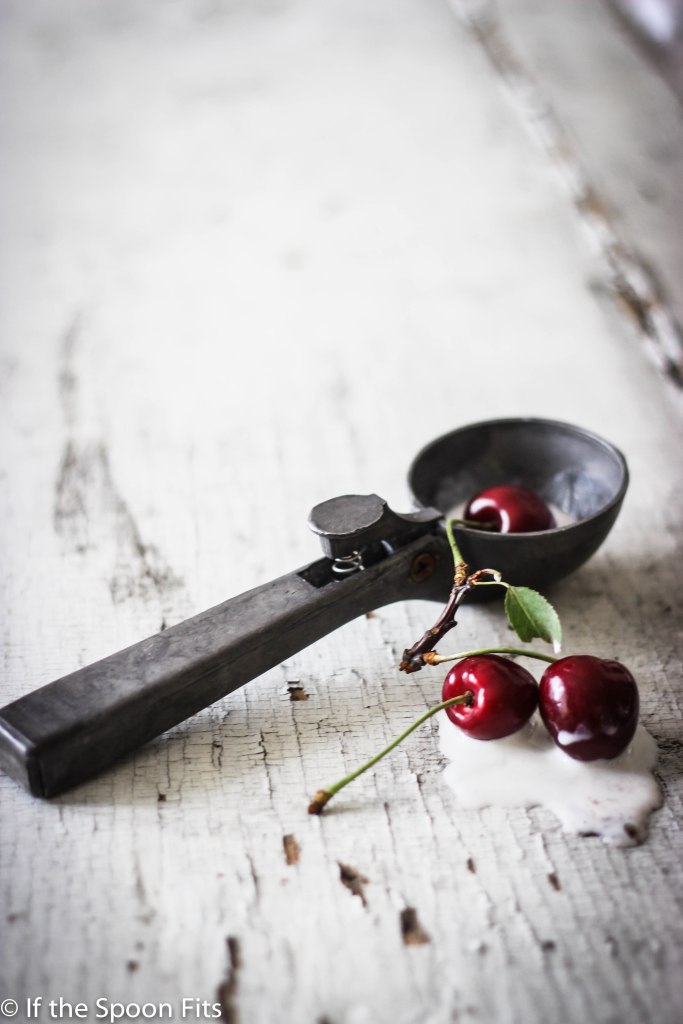 I generally try to be as transparent as possible with you guys when my creations don’t work out as planned…and this particular instance was definitely one for the books. This sundae sauce actually started as an ice cream.

It started off as a crème fraiche bourbon cherry ice cream, but then I decided that it was just too much – so many competing flavors that weren’t really complementing one another (but fear not – a crème fraiche ice cream will make an appearance down the road). Then I made a cherry bourbon ice cream that was bright pink and whose appearance pleased me very much, but it just didn’t taste right. The cherry flavor was diluted and strange.

Eventually, my frustration reached the point of no return, and I decided on a whim that I’d get these cherries drunk, add some sugar and salt, roast them, and see what happened.

Well, let me tell you – what happened next was amazing. The roasting cherries grew plump and soft and fragrant, juices bubbling in the pan.

You guys, I started getting excited. About cherries!

Originally, my idea was to fold some of the finished product into some brown butter or vanilla bean ice cream, as just one component of an overall broader ice cream flavor. But once the cherries cooled, I sampled one, warm and gooey and boozy, and knew right away that this flavor shouldn’t exist as a mere ripple; it deserved to be the star of the show!

The great thing about roasting the cherries is that it makes the sauce all thick and lucsious – no cornstarch or overnight refrigeration needed. It’s definitely one of the easiest recipes that I’ve had here on ITSF.

1) Cherries aren’t so bad after all. In fact, they’re pretty great! Stupendous, even.

This sauce is rich and delectable; I daresay even a bit sexy. Serve it warm atop vanilla ice cream with some toasted pecans, and watch it melt into a wonderful, boozy mess.

2.5 tablespoons bourbon (or, to taste)

2. Lay cherries in the pan, sprinkle with sugar, salt, and 1 tbsp of the bourbon. Stir around with a spoon, and bake for 25 to 30 minutes, keeping an eye on them to make sure the juices don’t burn. I’d stir them periodically, like every 7 to 10 minutes or so, and add a little more bourbon (just a bit) when things seemed a bit dry.

3. Remove from the oven, and allow to cool to room temperature. Using your fingers, break the cherries open and remove the pits and discard. Give the cherries a rough chop (or, if they’re soft enough, just do what i did and mash them with a potato masher :)), and stir in the vanilla and remaining bourbon.

4. Pour cherries and their juices into a jar or storage container, and store in the fridge for up to 3 weeks. Serve warm for an out of this world experience. Enjoy 🙂

Leave a Reply to If the Spoon Fits Cancel reply