Happy birthday, If the Spoon Fits! 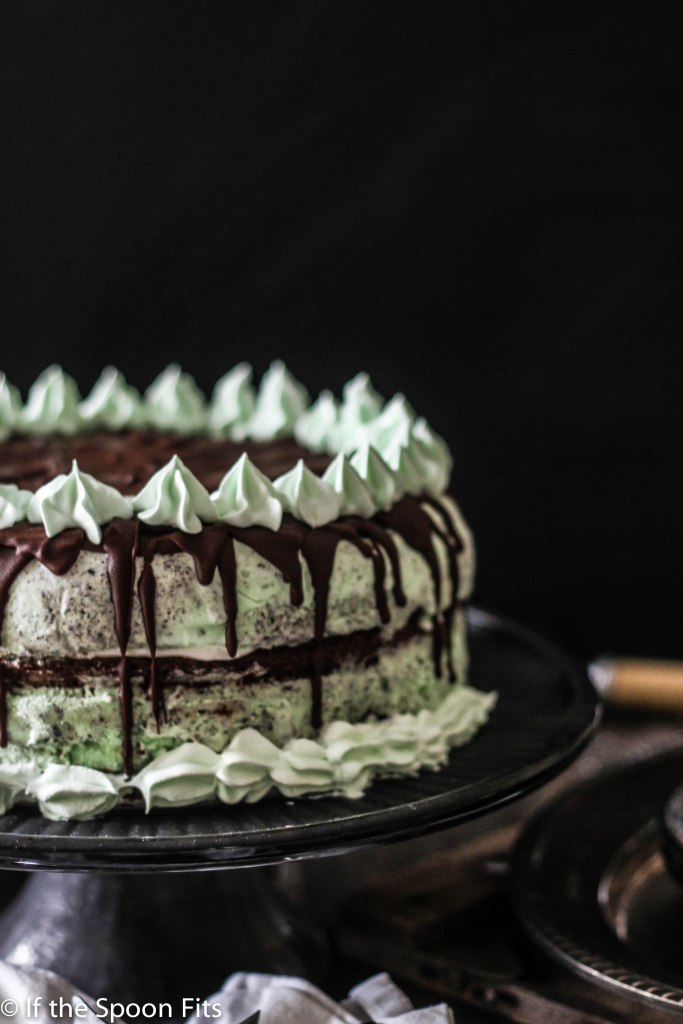 Two years ago today, I wrote my very first post on this here little blog, and now she’s a TODDLER! Can you believe it?!

They grow up so fast 😦

If I’d had more foresight at the time, I would have waited one more day so that my blog’s birthday didn’t always conflict with Bastille Day, but such is the nature of the blog beast – there’s always some French national holiday trying to steal my thunder.

You’re just gunna have to learn how to share the spotlight, Bastille Day. Not everything is about you! 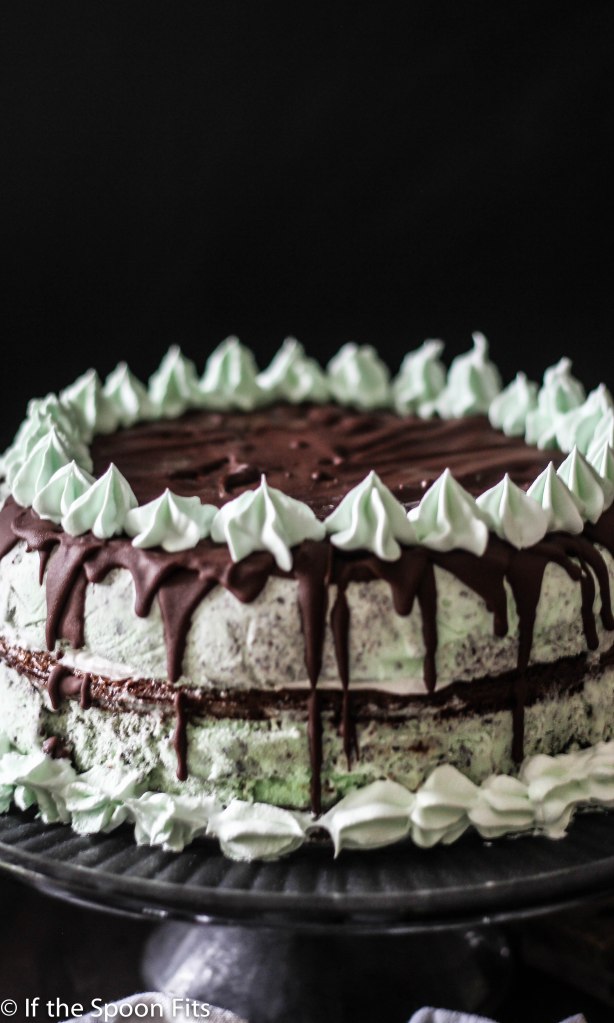 In anticipation of today’s post, I spent a few days brainstorming special celebratory ice cream flavors that could measure up to such a momentous occasion as the birth of the blog. But after all was said and done, I settled on my tried and true: mint chocolate chip – the flavor that started it all for me.

Immediately, I had the idea of doing a mint chip cake, but I worried that this wasn’t, well, unique enough. I’ve been experimenting with some weird flavor combinations this year, and doing some sort of artsy variation of mint chocolate chip, like a white chocolate mint julep, seemed more in line with my blog strategy as of late. But at the end of the day, I just couldn’t shake the idea of a simple, green, mint chip cake for two reasons:

1) Despite all of the culinary progression that I’ve made this year, I still haven’t let go of my childish notion that mint flavored things should be green. Unfortunately, white chocolate just doesn’t fit the bill.

2) The bigger issue? I just really, really, really wanted to make a cake for you guys, even if you can’t be with me in person to eat it. Because you deserve a cake. But not just any cake. You deserve the best cake in the whole world – a cake like those beautiful ones on Pinterest that’s all decked out with frosting and flowers and lit sparklers instead of candles because sparklers are HIPSTER and I wanted your cake to be GLORIOUS and CULTURALLY RELEVANT. 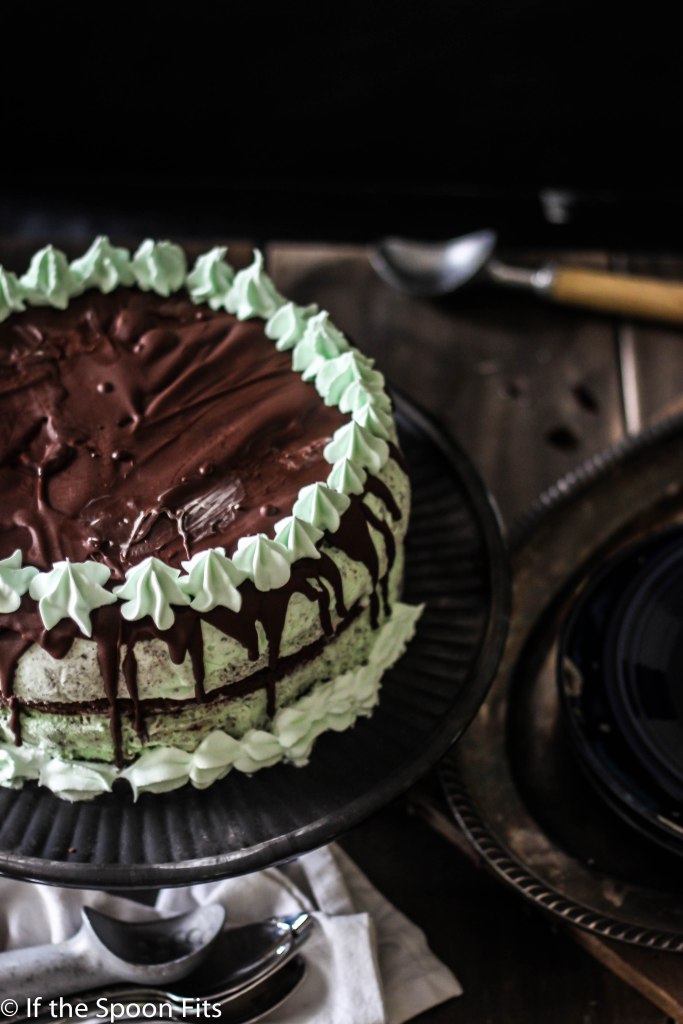 Decision made, I headed into battle, armed with 4 quarts of mint chip and a vision – a vision of a beautiful three or four tiered mint creation with perfect tufts of whipped cream and dark chocolate ganache cascading down the sides. Forget that I’d never made a cake before, let alone used a piping bag. How hard could it be?

Well, as it turns out, it was VERY HARD.

On a scale from 1 to 10, I’d wager that making a beautiful cake is somewhere up there between climbing Mount Everest and performing open-heart surgery.

Disclaimer: I’ve never tried two out of those three things, but something tells me making a cake, especially of the ice cream variety, in all its melty glory, is its own special brand of Extremely Difficult.

And apparently, I’m not very good at it. Case in point:

On Saturday, I made the first version of this ice cream cake, and it was a mess and a half. The layers were uneven and the piping was awful. When I went to cover the top with chocolate ganache, the ice cream melted down the sides and the cake started collapsing in on itself like some sort of bad science project.

I yelled. I screamed. I threw a straight up temper tantrum.

And then, I cried.

Over an ice cream cake. 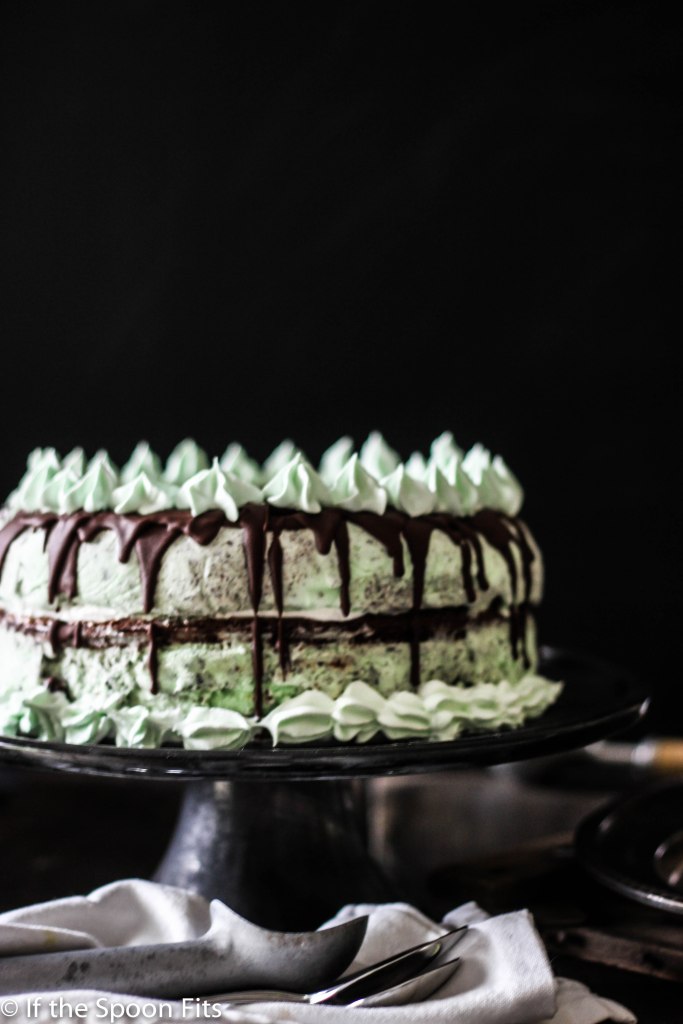 There are people in this world that are sick and starving and their countries are war-ridden, and I’m here crying over an ice cream cake (In my defense, at least I exhibited some level of self-awareness during my emotional breakdown; that counts for something right?). From there, I spiraled into a deep black hole of emotion, marked with bitter disappointment at my failure, but riddled with the shame and harrowing guilt that can only come with the first world problems associated with a part-time, not-for-profit, suburban ice cream blog.

I wallowed about for a few hours, trying to figure out my backup plan.

I started thinking, maybe I’ll just make some sort of dark chocolate mint ice cream, put it in a cone, throw in a candle, and call it a day. I’m clearly not capable of doing anything else.

Then, like a phoenix rising from its ashes, I found my resolve.

I will make a cake, I said. And it will be hipster and green and glorious, because THE PEOPLE DESERVE IT.

And just like that, I decided to start over again.

Is this cake perfect? No, of course not. In fact, it’s far from it. But you know what? I don’t care – I’m proud of it anyhow! And looks aside, it tastes pretty darn good (after all, it’s what’s on the inside that counts).

This blog isn’t about perfection; it’s about putting myself out there and trying something new. And part of that is realizing that not everything works out perfectly the first time around (or second or third). 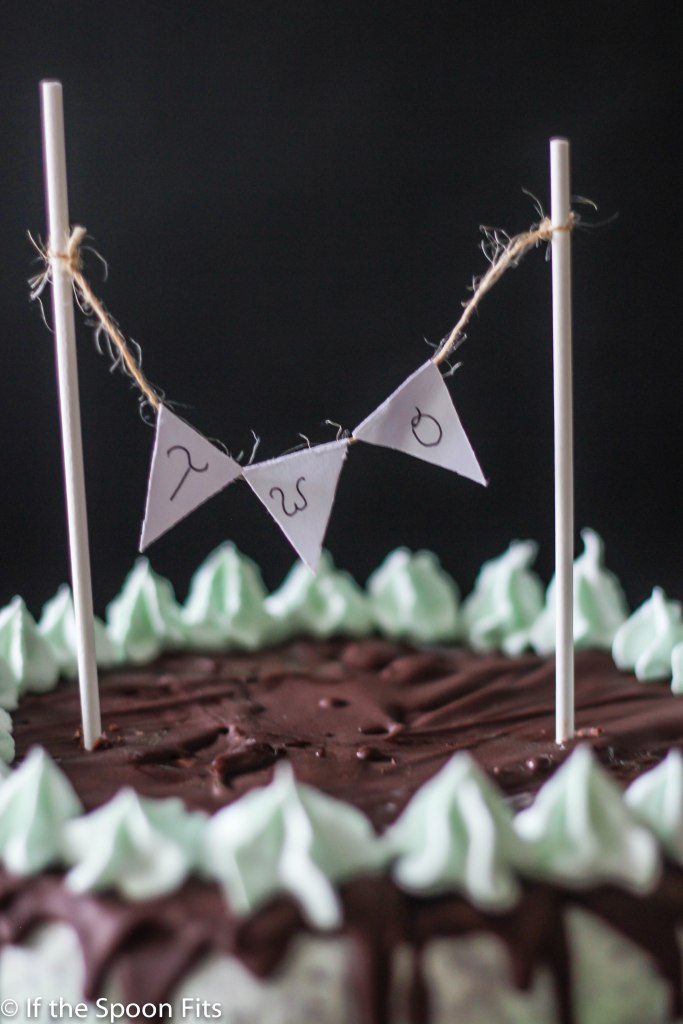 Yes, the blog is a toddler now, and I can’t think of a more appropriate metaphor for how I’m feeling: I know a little bit more than I did last year, but I still have a LONG way to go.

I’m insecure about my writing. I spell things wrong. I still don’t really know how my camera works. Sometimes my ice creams taste or look funny, and I get angry about it. Once in a while, I’ll cry.

But you know what? Those things are starting to feel less and less significant, and after I’ve failed, it’s been easier to pick myself back up again. And it’s all because of you guys! My super supportive, sweet, funny, “online” blogging friends who are slowly starting to feel like genuine, good old-fashioned pals.

Thank you, from the bottom of my heart, to everyone who has visited, liked, followed, shared, and commented on this blog. Heck, even if you dislike this blog, I still appreciate you (you could have spent that five minutes doing something else!).

I’m constantly floored by the level of talent in the blogosphere – people with day jobs who come home at night to bake and blog and take pictures. You’re a constant source of inspiration for me, and I’m lucky to know you all!

So, dear friends, I present to you this perfectly imperfect mint chip ice cream cake, as a symbol of my appreciation for you and everything you do. It’s not the prettiest thing in the world, but there’s a lot of love in between those layers of brownie and ice cream. A lot of love, a little frustration, and a boat load of gratitude. Because that’s what this blog is supposed to be all about 🙂

1 box of brownie mix (or homemade, but I actually prefer boxed mix for this because I’ve found it stays softer when frozen)

2 or 3 drops of green food coloring

1. Preheat oven and prepare brownie mix according to directions. Split mix between two prepared (aka sprayed with oil or lined with parchment) spring form pans. Bake for about half the time that is suggested (20 minutes or less should do the trick). Remove from the oven and allow to cool completely. Place in freezer for 2 hours or until frozen.

2. Remove the ice cream from the freezer and allow it to soften.

3. Take the pans with the brownies out of the freezer. Remove one of the brownies and set aside; line the empty pan with plastic wrap.

5. Once the layers are frozen, remove them from the freezer. Take the ice cream layer that is in plastic and unwrap it carefully, placing it on top of the brownie layer in the other pan. Cover with plastic and freeze for another 2 hours.

6. Make the chocolate shell coating: combine chocolate chips and veggie oil in a heat proof bowl and melt in the microwave in 15 second increments until melted completely. Add in the peppermint oil, and allow the mixture to come to room temperature.

7. Remove the ice cream cake from the sprinform pan, and pour the chocolate shell over the top, starting in the center and working your way outwards, allowing the chocolate to spill over the sides. Refrigerate until hardened.

8. Final touches: Make peppermint whipped cream or add peppermint oil and green food coloring to store bought whipped topping. Pipe some cute decorations on the tops and sides, as you see fit. Freeze for a bit longer, until decorations set.

Leave a Reply to Tux of Brooklyn Homemaker Cancel reply