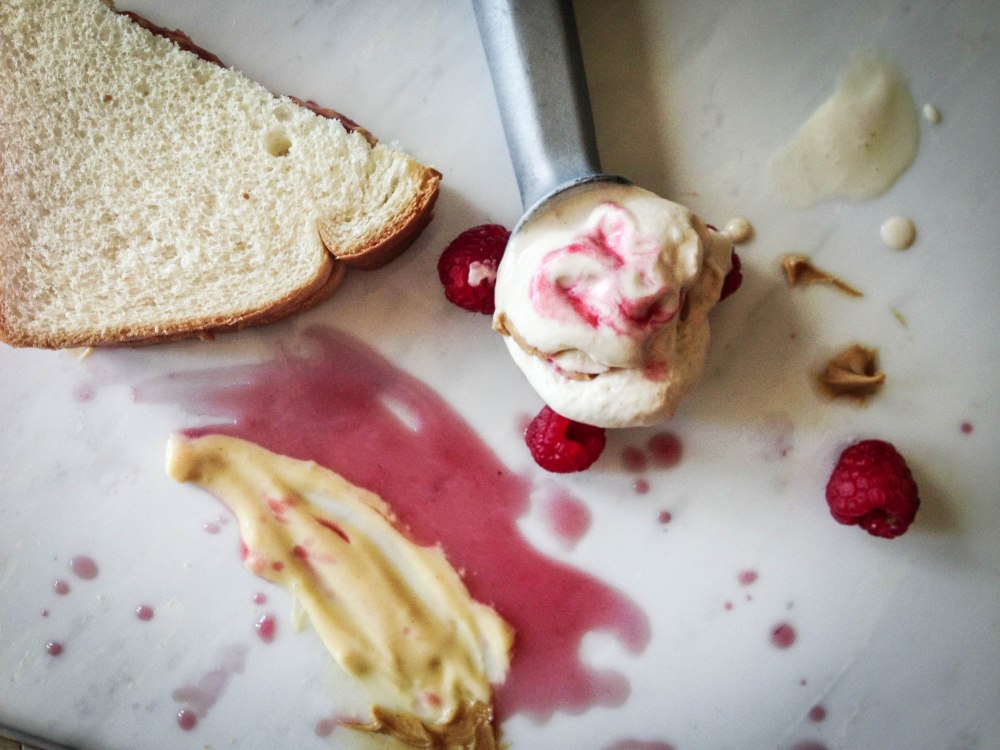 No, no…I’m not all of a sudden going to start piling PB&J on top of scrambled eggs or cheeseburgers (although I’m sure those two combos could be quite delicious, under the right circumstances).

What I mean is…PB&J is slowly becoming the Flavor of the Moment. Let me explain. 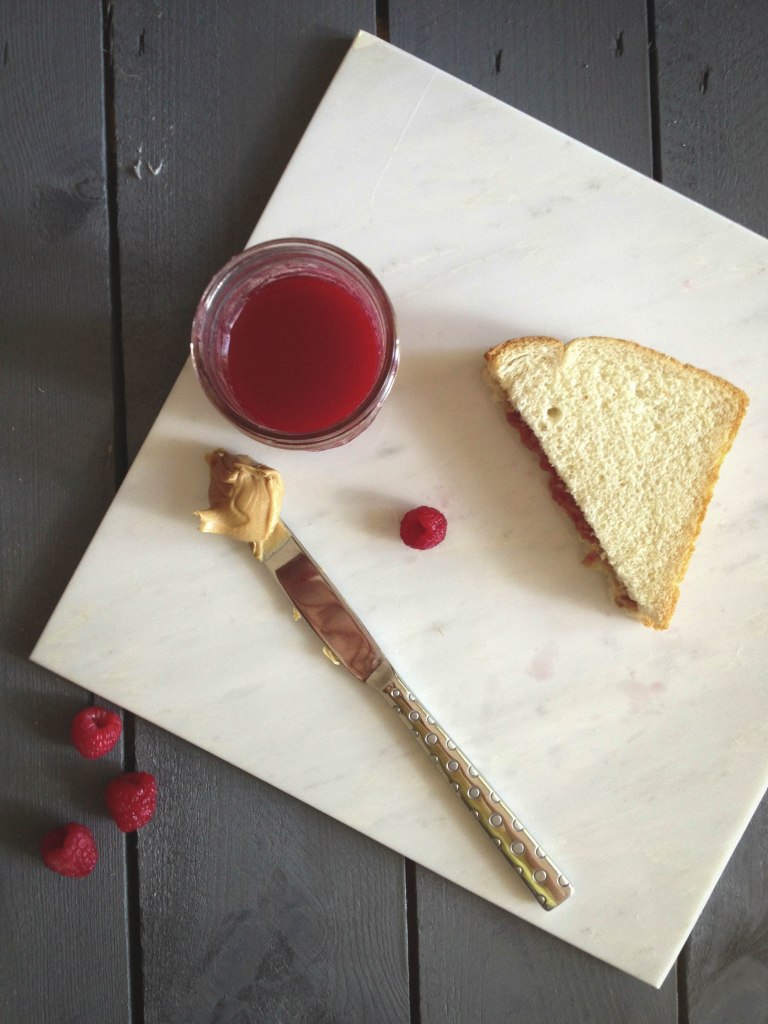 Remember how a few years ago, it seemed that suddenly, the culinary world became obsessed with bacon?

(Or maybe it wasn’t suddenly…maybe I just don’t get out enough).

Anyhow, it seemed like everything from fine dining restaurants to donut shops started including bacon as the feature ingredient in many menu items, especially desserts. Maple bacon this, peanut butter bacon that, chocolate covered bacon, bacon brownies, etc…you get the point. Bacon, bacon, bacon!!!

As wonderful as this trend was and continues to be, the sudden embrace of bacon as a “trend food” left many people, especially those of us in the midwestern United States, downright baffled. After all, bacon is an ingredient that most of us grew up with and consumed on a regular basis. So, when this whole bacon thing happened, we country folk just sat there in amazement and thought, “Really? But we’ve known this all along…” 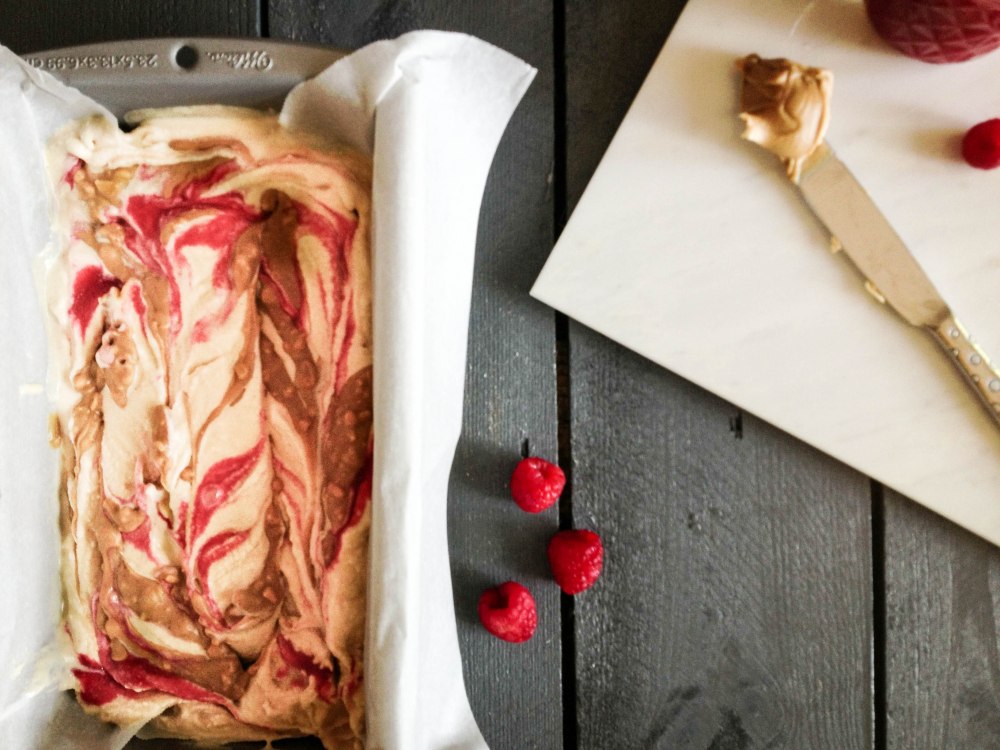 Of course, I’m not complaining. I love bacon. LOVE. In fact, there are no words to express how much. Especially in desserts.

I’m just saying that maybe, despite popular belief, we meat-and-potato-loving people know what we’re talking about after all. We might even be…dare I say…trendsetters? 🙂

Now, it seems that yet another one of those homey, much loved flavors is front and center in the culinary world – PB&J. 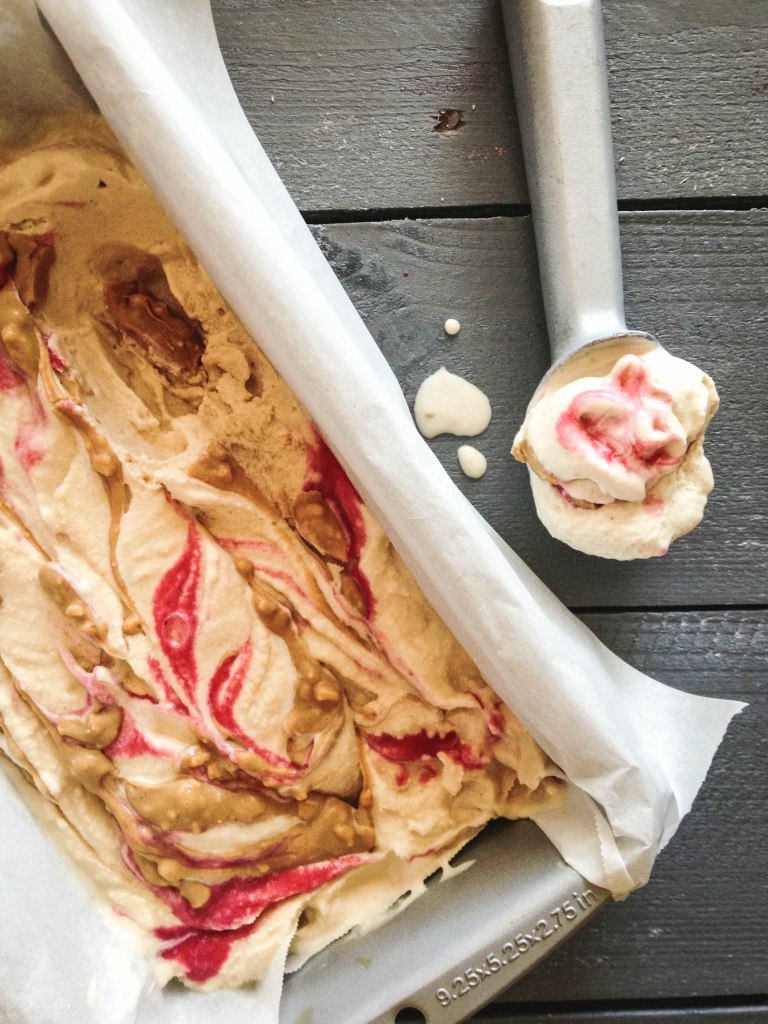 Much like bacon, PB&J is a staple food item in many American homes. As a child, it is merely the snack of choice, but as an adult, it holds a special nostalgia that reminds us of paper bag lunches and after school snacks.

I don’t know about you, but I enjoy PB&J even more now than I did when I was small. It’s like mint chocolate chip ice cream – you can’t eat it and not become 6 years old again. 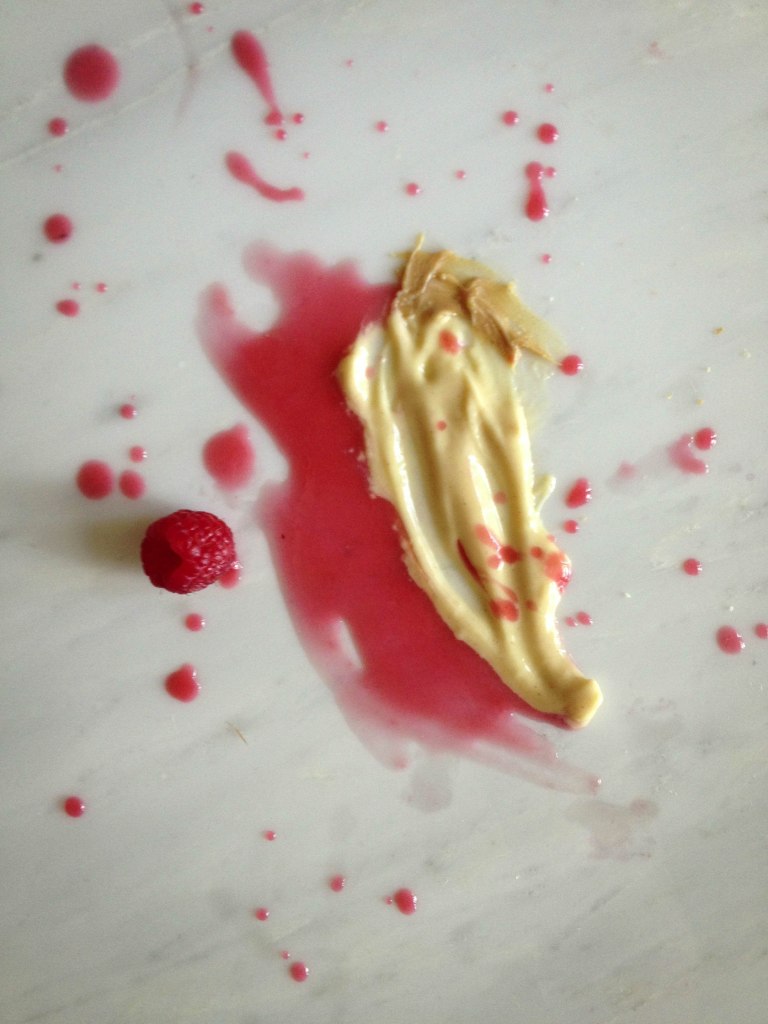 Yup, Good ol’ Peanut Butter and Jelly might just be the next bacon. Especially seeing as how PB&J themed items are popping up in everything from donuts to cheesecakes, french toast to cookies.

And in a move that seemingly solidifies PB&J’s status as the new cult flavor, Ben and Jerry’s has recently introduced its own version of PB&J – in the form of a delectable ice cream, aptly named “Peanut Butter Jam Session.” This hot new flavor is available only at Target stores, and is currently blowing minds across America as we speak.

Naturally, upon hearing the news, I immediately dropped everything and drove to my nearest Target store. I arrived just in time – only two pints left! I grabbed them both, and shed a silent tear of regret that I’d have to make do with just two.

Later that night I dug in, and was surprised at how relatively…restrained the flavor was. There were delicate swirls of jelly, not too much peanut butter. It was just right, perfectly balanced… 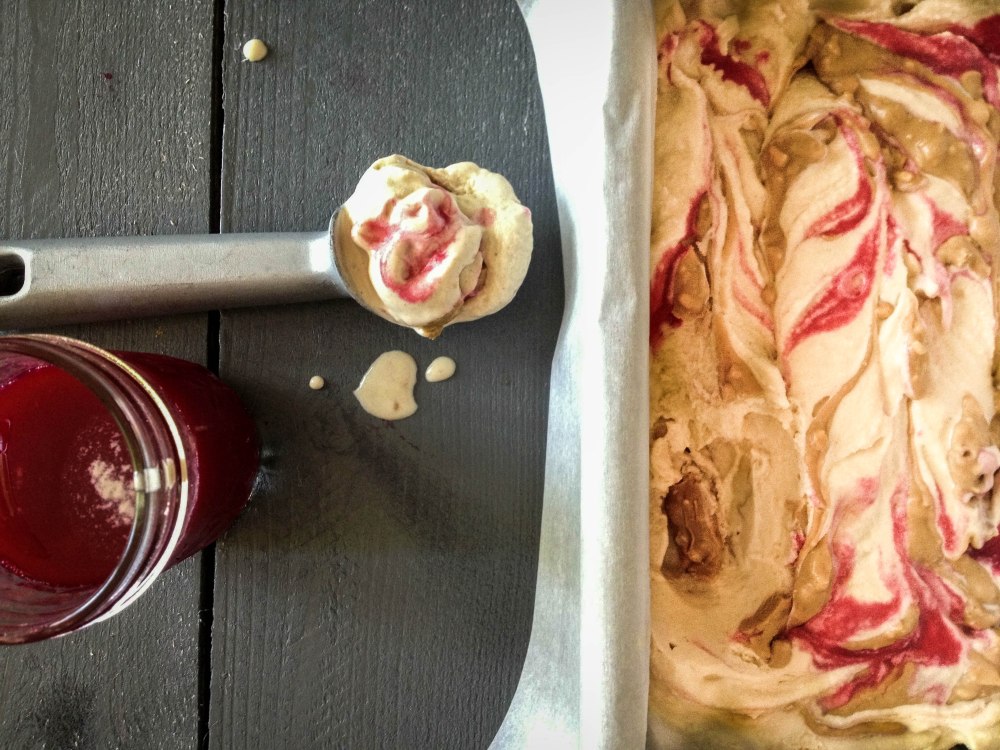 …almost too balanced for my liking.

Balance is a good thing…when walking on tightropes or performing the Nutcracker. But in general, isn’t food (and for that matter, people) a little more fun when it’s slightly… imbalanced?

Ice cream is one of those areas where I just don’t want anything to do with balance. I like gobs…I like decadence. And Peanut Butter Jam Session just wasn’t doing it for me. So, I decided to make my own. 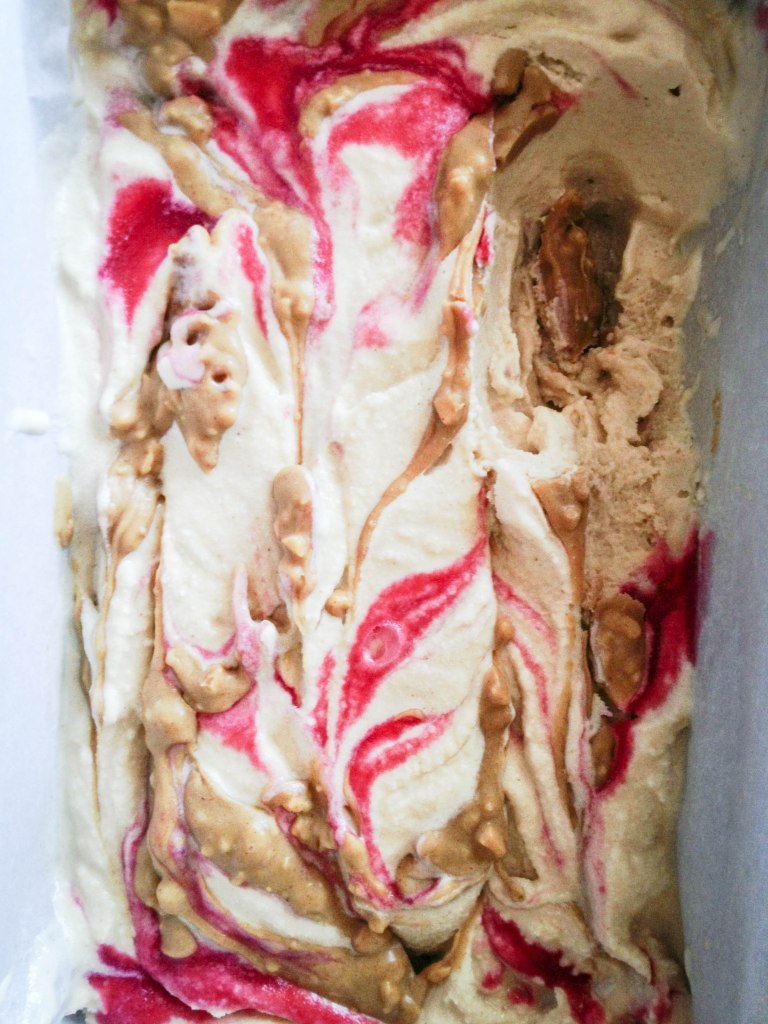 I hope you enjoy this decadent, creamy version of a childhood treat, and that the flavor combo gives you as much joy as it did during the days when “recess” was still a valid part of your daily agenda.

Peanut butter and jelly is the new bacon…and I’m ready to eat it all day long!

For the Peanut Butter base*:

*Peanut butter base adapted from The Perfect Scoop by David Lebovitz

Pinch of salt (I use a pretty large pinch)

For the raspberry swirl:

For the peanut butter swirl:

1/4 cup peanuts (I use roasted and salted), chopped or crushed

1) To make the ice cream, blend the peanut butter, sugar, half-and-half, salt, and vanilla extract together in a blender or food processor until smooth. Chill at least two hours, or preferably overnight.

2) Prepare the raspberry sauce: Stir together the sugar and raspberries in a small saucepan and bring to a boil, then continue to simmer until the mixture thickens (about 10 minutes). Once thickened, remove from heat and let cool completely.

4) Make the ice cream: Remove the chilled peanut butter and half-n-half mixture from the fridge, and freeze in your ice cream machine per the manufacturer’s instructions.

5) Put it all together: When the ice cream is done churning, add half of it to the storage container of your choice. Swirl in some of the peanut butter mixture and raspberry sauce. Add the remaining half of the ice cream, then swirl with more peanut butter and raspberry sauce. Once you have reached an acceptable amount of decadence, eat and enjoy! Or, freeze for a few hours if you like “hard” ice cream.